From UnrealIRCd documentation wiki
Jump to navigation Jump to search

UnrealIRCd 6 introduces optional JSON logging in log files and in server notices sent to snomasks. This makes it easy to parse and process log messages by programs and bots.

This is an example of the JSON log output when someone types JOIN #five: 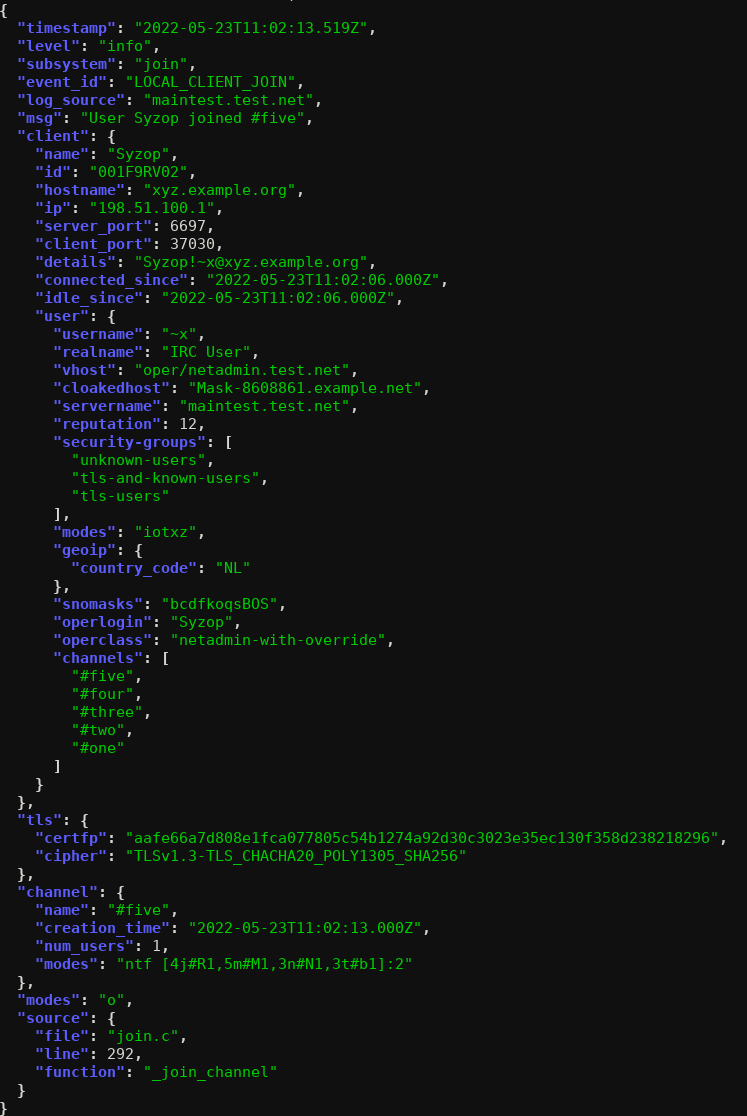 Usually you will want to keep your ircd.log logging as plaintext (non-JSON) because it is easy to read by humans.

So, just add another NEW log block with JSON logging enabled, to for example ircd.json.log, like this:

As you can see, you simply set the log::destination::file::type to json.

The JSON logged to the file is not nicely formatted and does not contain color. The colorized JSON log as shown in the screenshot on this page is generated with the tool jq. So this is all completely optional, just mentioning it for anyone interested in seeing it colorized:

IRCOps receive server notices through snomasks. It is possible to receive the associated JSON logging data on IRC as well.

No IRC client supports this natively out of the box, so here is a technical explanation:

In mIRC scripting the JSON data in the server notice will be in $msgtags(unrealircd.org/json-log)

Your bot/program can then parse this as JSON data and process it. The format is much more consistent than regular text messages and typically shows a lot more details about the objects involved (client, channel, etc)

First, request the capability, oper up, and for this example we will also set the join snomask (+s +j):

Then when another client types JOIN #five we will receive the following raw server traffic:

With the help of a JSON library the client can then decode it to objects.

Every JSON log message contains at least the following data:

In addition to that there are a couple of fields that are often included (but not always!):

There are many possible log messages and the additional fields that are available for each event differ. You can look at the List of all log messages for a particular event to see how it is generated. Or you can capture real log items or IRC data.

This can be a user, a server or a freshly accepted connection that is still in the handshake and we don't know yet what it will be.

See also below for the user and server objects.

When using the channel.get API call, more details are available:

Included in socket errors. Such as a socket being closed due to a network problem or otherwise.

NOTE: The error codes and strings come directly from the OS and C library, hence they will differ between OS's (Linux, Windows, FreeBSD, ..).

Included in SSL/TLS errors. Such as failure to read a certificate file or a socket being closed due to a network problem.

NOTE: The error codes and strings come directly from OpenSSL (outside our control).

This is the content of a Link block. It is typically included in server linking errors, but only if it is known which server to link to/from.

This is a server ban, such as a GLINE or Spamfilter. It is also used for ban exceptions (ELINE).